Paleoceanography & Sedimentary Geochemistry
Please check out this page if you are interested in joining our group. 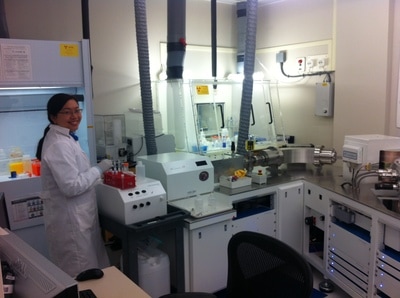 ocean oxygenation and deoxygenation, the carbon cycle, and animal evolution and extinction events

My research is focused on investigating the causes of environmental change in Earth's history. I am interested in the links between the biogeochemical cycles of oxygen, carbon, and redox-sensitive elements. I reconstruct past environmental conditions using geochemical clues in the marine sedimentary record. Much of my research interests lies in paleo-redox proxies and quantitative interpretations of these records.

The end-Permian mass extinction (ca. 252 Ma) was the most catastrophic event in the Phanerozoic (at least, from the perspective of animals), with ~80% of marine genera going extinct. The extinction is attributed to the eruption of Siberian Traps, a large volcanic province that resulted in disastrous conditions on land (wild fires, denudation of the continents, ozone hole, acid rain) to the oceans (acidification, extremely hot temperatures, toxic conditions and low oxygen). The recovery of biodiversity, ecological complexity, animal body size, metazoan reefs, and other measures of a healthy ecosystem did not appear to be fully complete until the Middle Triassic, about 5 million years after the extinction. This event represents a severe perturbation to the carbon cycle, and may be instructive for understanding how the Earth system responds to climate change on long time scales.

We show that anoxia expanded dramatically, concurrently with the extinction, and likely played a role in delaying the recovery [Lau et al., 2016 PNAS; figure below].  To infer this record of de-oxygenation, we measured uranium isotopes in multiple carbonate stratigraphic sections. Uranium isotopes are emerging as a promising proxy for redox conditions of past oceans. The basis of this proxy relies on the fact that the solubility and 238U/235U ratio of aqueous uranium varies depending on its redox state. In the ocean, uranium is reduced primarily within anoxic sediments; thus, the uranium isotopic composition of seawater tracks the areal extent of anoxia. Because of its long residence time, uranium is representative of global redox conditions. ​Limestones are useful archives of seawater uranium because primary CaCO3 precipitates are not fractionated from seawater, although bulk carbonates may be affected. Our records show good agreement despite being situated on opposite sides of the Paleo-Tethys, indicating that this non-traditional isotopic proxy may be used to infer global changes. We construct a box model to provide first-order quantitative constraints on seafloor anoxia during the Early Triassic recovery. 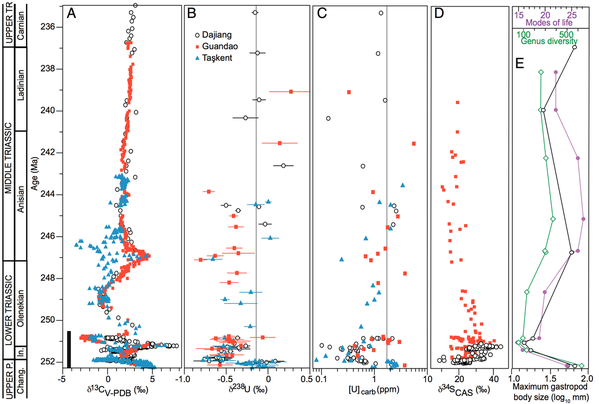 Uranium isotopes, analyzed in carbonates, are an exciting new proxy that is showing a lot of promise and yet requires additional development. You can check out reviews of the uranium isotope proxy and its use for paleoceanographic reconstructions in Lau et al., 2019 [Cambridge Elements] and Zhang et al., 2020 [Geochim. Cosmochim. Acta]. 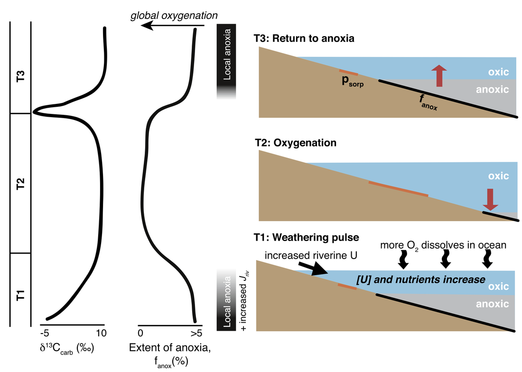 Lau et al., 2017 EPSL
Uranium isotopes can also reveal new insights into ocean oxygenation, its relationship to carbon cycling, and the rise of animals in the Neoproterozoic. My uranium isotope record in two well-preserved limestone stratigraphic sections from Mongolia suggest that the oceans became widely oxygenated following the Sturtian Snowball Earth glaciation [Lau et al., 2017 EPSL; figure to left]. This may possibly be attributed to post-glacial weathering. However, oxygenation was temporary, and more anoxic conditions returned prior to the Marinoan Snowball Earth. This return to reducing conditions occurs at the same time as a large negative carbon isotope excursion, providing a new clue to the enigmatic carbon isotope record of the Neoproterozoic. 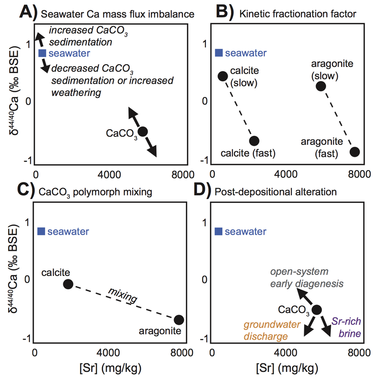 Lau et al., 2017 Chemical Geology
Carbonates are an important archive of seawater geochemistry, but are also susceptible to diagenetic alteration. Calcium isotopes have shown promise as tracers of seawater calcium [Silva-Tamayo et al., 2018 GSA Bulletin], and thus may track changes to the ancient calcium cycle. Because the carbon and calcium cycles are linked through CaCO3 weathering, acidification, and burial, mass flux imbalances may be tracked using calcium isotopes. My study of calcium isotopes in the Lower and Middle Triassic carbonates illustrates that local processes can easily overprint any original record of seawater calcium chemistry. I use the relationship with strontium concentration to help identify early diagenetic recrystallization [Lau et al., 2017 Chem. Geol.; figure to right]. A model of water-rock exchange suggests that this process is likely to have occurred in many calcium isotope records measured in bulk carbonates, but the first-order trend may still be captured.
Current work includes investigating uranium reduction and fractionation during early diagenesis in marine sediments, through a combination of field, analytical, and numerical approaches. I am using the Monterey Formation as a case study to explore uranium fractionation under a variety of depositions environments that experienced different degrees of restriction, anoxia, and sedimentation rates. I also employ a multi-component reactive transport model to test the sensitivity of uranium isotope fractionation to these factors [Lau et al., 2020, Geochim. Cosmochim. Acta].

I am also interested in the overall effects of diagenesis on the carbonate geochemical record to understand how to improve our assessments of these processes on interpretations of seawater geochemistry and environmental change. Please check out recent review papers on the application of Ca isotopes in deep time [Gussone et al., 2020, Chem. Geol.] as well as a broader overview of the critical factors to be considered in understanding the drivers of carbonate diagenesis [Fantle et al., 2020, Ann. Rev. Earth Planet. Sci.].

Changes in pCO2 reflect carbon cycling at the Earth's surface (involving the atmosphere, oceans, and terrestrial biosphere) and exchange between these surficial reservoirs and the crust and mantle. On geologic time scales, the second group of processes---which include weathering, mantle degassing and volcanism, and carbon burial---play a large role in determining atmospheric pCO2 and its stability.

The silicate weathering feedback drives the recovery of the carbon cycle following a perturbation---a natural "thermostat." To illustrate, an increase in volcanic CO2 emissions and the subsequent bump in pCO2 drives chemical weathering of the continents. The chemical reaction results in an increase in the flux of aqueous weathering solutes (such as bicarbonate) that ultimately reaches the oceans as alkalinity, bumping up the saturation state of CaCO3 minerals. Greater CaCO3 precipitation and burial follows, drawing down atmospheric pCO2 on time scales of 10,000 to 100,000 years. This can be represented very generally as:
CaSiO3 + CO2 --> CaCO3 + SiO2 .
The strength of this feedback has varied through time, and is dependent on a combination of processes, including climate, tectonics, lithology, continental area, the physiochemical response of plants, and so on [Caves et al., 2016 and Ibarra et al., 2019 in Am. J. Sci.; see figure below illustrating changes in the feedback strength through the Cenozoic]. I am interested in how changes in the strength of this feedback may determine the stability of the carbon cycle to perturbations through Earth history.

Caves et al., 2017 EPSL
On >1 Myr time scales, the carbon isotope record is our best archive of past carbon cycle variability. ​​Oscillations of the carbon isotope record decrease in amplitude through the Phanerozoic [Bachan et al., 2017 Am. J. Sci.; figure below]. In an extension of a carbon cycle model that I constructed for the Early Triassic [Lau et al., 2016 PNAS], co-authors and I show that fluctuations in the depth of the oxygen minimum zone through time may modulate organic carbon burial and thus the carbon cycle. We show that the carbon isotopic composition of seawater is particularly sensitive to variations in parameters relating to organic carbon burial and phosphate burial on 1 to 10 Myr time scales. Sea-level change may be a factor that acts on these time scales, but its functional relationship with the oxygen minimum zone and drivers on these time scales remain unknown. I am interested in continuing to explore how sea-level change can influence the oxygen minimum zone. 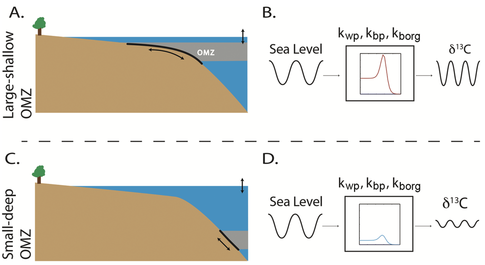